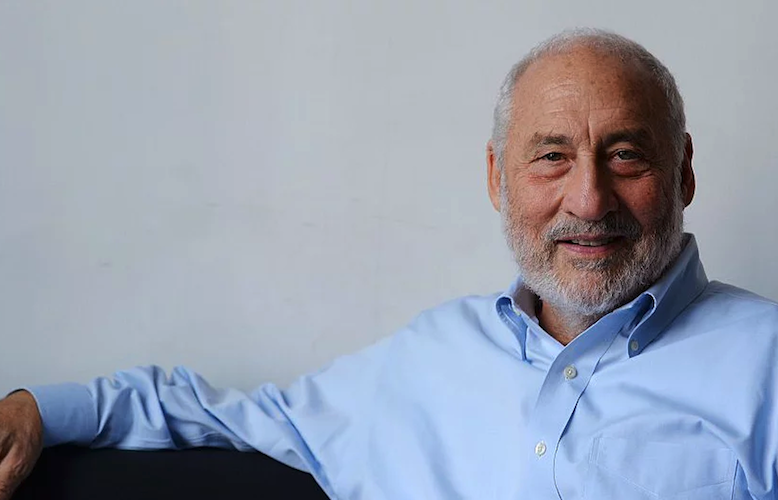 Ask Nobel prize-winning economist Joseph Stiglitz for his thoughts on the Turnbull government’s arguments that cutting the company tax will lead to strong investment and higher wages, and he doesn’t mince words: “I don’t think there’s any validity in it.

Rather than focus on company tax cuts, Stiglitz argues governments should seek to “increase the wellbeing of the majority of people in the country with growth that is sustainable inclusive and democratic”.

Stiglitz was speaking from his New York office on the eve of the announcement that he will receive this year’s Sydney Peace prize. Each year the Sydney Peace Foundation honours a nominee who has promoted “peace with justice”, human rights and non-violence. The Columbia University professor and former chief economist at the World Bank joins past recipients such as the activist movement Black Lives Matter, the journalist Naomi Klein, Prof Noam Chomsky, and the former Irish president, Mary Robinson.

Stiglitz is well-known for his criticism of trickle-down economics as well as his work on bridging the inequality gap. He says the argument in favour of cutting company tax to increase wages is a spurious one.

“In terms of economic analysis, there is very little evidence that [a company tax rate cut] actually even spurs investment,” he says.“Most investment at the margin is financed by debt, and the debt interest repayments are tax deductible. So while the tax rate affects the return, it also affects the cost of capital in exactly a symmetric way. And so at the margin there is essentially no effect on investment.”

In 2010 Stiglitz praised the stimulus measures put in place by the Rudd government during the GFC, describing it as “the best designed stimulus package of any … advanced industrial countries”.

Now he points to the response by companies in the United States after its recent company tax rate cut as evidence of the lack of impact on wages: “Corporations want people to believe that by cutting it that somehow workers are going to be better off.”

He calls the highly publicised wage rises that have followed the tax cuts in the US – and which have been lauded by the treasurer, Scott Morrison, as evidence that such cuts lead to higher wages – “a big joke”.

Earlier this year Morrison argued that companies would increase wages after a company tax cut, saying in an ABC interview: “We’ve already got businesses saying that’s what their behaviour would be.”

Stiglitz says companies pretended the tax cuts were a way to increase wages, but the reality was often very different. “You had a company like Walmart that said now we have enough money, we can raise the wage by a dollar an hour.

“Walmart were sitting on a lot of money. It’s not as though they could not afford it [before the tax cut]. They were using this in a very political way to persuade workers that the workers were the big beneficiaries of the tax cut. But the data since last year’s tax cut shows that most of that money went to share buy-backs, some went to investment and very little went to workers.”

A survey by Just Capital which tracked 1,000 firms found 57% of the benefits of the tax cuts were going to shareholders, 27% towards investment and possible job creation and just 6% on higher wages.

For Stiglitz, that such tax cuts continue to be propagated both in the US and in nations such as Australia is evidence of an economic system which is designed to help companies rather than increase the wellbeing of the majority of people in the country – with growth that is sustainable, inclusive and democratic.

He argues that the strand of economic policy of smaller government and lower taxes that took root in the early 1980s displayed a breakdown in the social contract that had existed since the end of the second world war.

This certainly accords with studies on inequality such as those by Thomas Piketty and the OECD. Before entering the second world war, the richest 1% in the US held just under 20% of the national income. After the war, this fell steadily, reaching 10% by 1980. Since then, however, it has risen to be above 20%. A similar, though less stark, pattern has occurred in Australia as well. 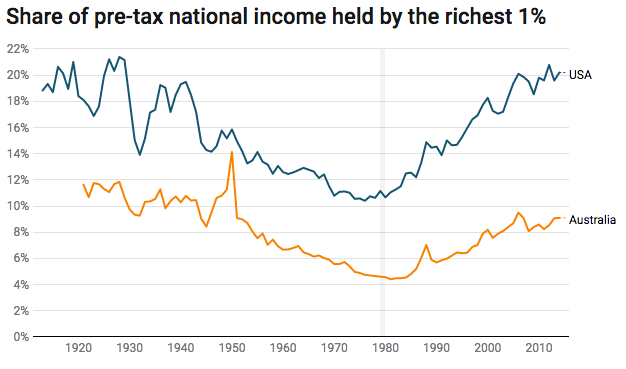 Stiglitz believes the post-second world war social contract began to erode in the US in the early 80s, and those who wanted to return to an older kind of capitalism marked by a high level of inequality stepped forward. Recent times have seen what he describes as “the weakening of unions, the weakening of the worker bargaining power and an assault on public education”, he says.

“It’s been a whole set of things that has been a manifestation of the breakdown of the social contract.”

And then there’s the rise of globalisation.

Stiglitz, who has recently updated his 2002 work, Globalisation and its Discontents, to consider the impact of the Trump presidency, might be viewed as a critic of globalisation given his long-standing criticism of the Trans Pacific Partnership. However, he says there is no “inconsistency between equality and globalisation, but it does mean that you have to manage globalisation in the right way”.

For many countries, globalisation is not about free trade. Instead he sees it as an attack on workers’ bargaining rights. “Corporations were more interested in getting cheap labour – they actually wanted the workers to suffer. They won when workers’ bargaining power was weaker, because that meant not only could they get cheaper labour abroad, they could get cheaper labour at home.”

He holds up Sweden as a better alternative for governments to follow.

“[Sweden] structured globalisation in such a way as to make sure that everybody was a winner. They made sure that they help people move from lost jobs to new jobs.”

Stiglitz recalls a former Swedish finance minister telling him the reason the country was successful was because it has a high tax rate. That’s not to say people were attracted by the higher tax rate. Instead, Stiglitz says, it means: “If you’re going to have a roughly balanced budget and you’re going to provide the kind of environment that is attractive to business, you have to have a high tax rate to finance the technology, infrastructure and the education system that makes the society work.”

Stiglitz compared Sweden with the US rust belt states, such as Pennsylvania, West Virginia, Ohio, Michigan and Wisconsin, that have seen a growing opioid crisis, high alcoholism, poor education, and poor infrastructure, and are consequently unattractive locations for firms. He argues this because governments have consistently voted down taxes which impacted on the labour force. “Beneath the tip of the iceberg [of the drug overdoses] is a dispirited labour force,” he says.

Rather than being the fault of globalisation, he says this is part of the outcome that the US Republican party has been working for – a small government (but not necessarily small budget deficit) and a labour force with poor bargaining rights.

Instead, he argues, it shows the need to acknowledge there are losers out of trade and that advanced countries such as Australia need to have policies that help those who are being disadvantaged by globalisation. This should include decent education and health policies.

“You need to ensure that people have the skills that make it easier to move from job to job,” he says, with “some kind of social protection”.

His comments on wage negotiation sit well with the latest ACTU proposals to move away from a pure enterprise bargaining framework.

In a speech last month at the National Press Club, the Australian Council of Trade Unions’ secretary, Sally McManus,argued that enterprise bargaining, which was introduced by the Keating government in 1993, was “so restrictive, excessively regulated” that it was “smothering wage growth”.

This echoes the suggestions put forward recently by Tim Lyons, a former assistant secretary of the ACTU, who told Guardian Australia: “I’m increasingly of the view that we need to describe firm-level enterprise bargaining as a failure.”

Stiglitz agrees, saying that when the bargaining framework changes, like eliminating sectoral bargaining and implementing plant bargaining as occurred in Australia in the 1990s, unions can’t deliver.

The answer is to band together. “When groups of individuals realise that the only way they are going to better themselves is through collective action, I think it’s going to be more likely to occur.”

There is also room for the more interventionist industrial relations approach put forward by the ALP: “I’d like to believe that firms would be responsible and treat workers decently and pay them extra if they worked overtime, but I think the reality is that’s just not the case.”

Instead there needs to be strong government policies to protect workers.

Recently Labor signalled it may push to raise the minimum wage. This would be a good move, says Stiglitz, adding arguments against it in favour of the economy were weak.

“The overwhelming evidence is that moderate increases in the minimum wage do not have a negative effect on employment,” he says. For instance, in the US “places such as Seattle have doubled the minimum wage from $7.25 to $15, with no adverse effect”.

The Trump presidency is more likely to have an adverse effect on the American economy, he says.

It’s not a trade war with China, brought on by Trump’s recent tariff increases, that should be a concern, he says, mostly because the Chinese government chose to respond in a measured way.

Instead the US economy could be threatened by Trump’s erratic behaviour and his willingness to attack individual firms. One of his recent targets for example has been Amazon, along with its chief executive, Jeff Bezos, who is also the owner of the Washington Post. Stiglitz describes Trump as “acting like a fascist”.

“It’s so dangerous having so much power in the hands of somebody who is so erratic and so unrestrained,” he says. He says the American business community is living in fear: “You feel the fear they have, the fear to criticise him unless they’ll unleash a wave of tweets. He has instilled a level of fear that I have never seen in this country.”