For his work as Chairman of South Africa’s Truth and Reconciliation Commission, his leadership of the anti-apartheid movement against racial oppression, and his tireless campaigning of reconciliation through tolerance and forgiveness. 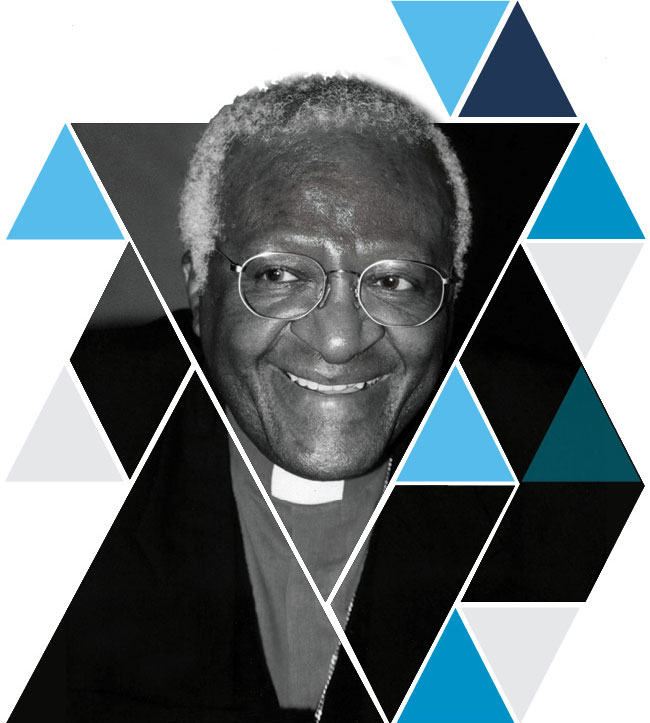 Born in the early 1930s, Desmond Tutu grew up in South Africa. As a boy, Tutu wanted to become a doctor, but when his family could not afford the training he followed his father’s footsteps into teaching. He later studied theology, and Tutu’s rise to international prominence began when he became the first black person to be appointed the Anglican dean of Johannesburg in 1975. In 1987, Tutu became the first black Anglican Archbishop of Cape Town.

I tried to be what my teachers had been to me to these kids, seeking to instill in them a pride, a pride in themselves. A pride in what they were doing. A pride that said they may define you as so and so. You aren’t that. Make sure you prove them wrong by becoming what the potential in you says you can become.

It was in this position that he emerged as one of the most prominent and eloquent voices in the South African anti-apartheid movement, especially important considering that many of the movement’s prominent leaders were imprisoned or in exile. Desmond Tutu is now known as one of the world’s most prominent spiritual leaders:

“I never doubted that ultimately we were going to be free, because ultimately I knew there was no way in which a lie could prevail over the truth, darkness over light, death over life”

In 1984 he was presented the Nobel Peace Prize for his role as a unifying leader in the campaign against apartheid in South Africa, a nonviolent struggle for liberation, human dignity, and a democracy free from racial oppression. The Nobel committee awarded Tutu the Prize “not only as a gesture of support to him and to the South African Council of Churches of which he is leader, but also to all individuals and groups in South Africa who, with their concern for human dignity, fraternity and democracy, incite the admiration of the world”.

In 1933 South African apartheid came to an end, and in 1994 Nelson Mandela was elected as the country’s first black president. Mandela appointed Tutu to head the Truth and Reconciliation Commission. Tutu played a critical role in supporting the process of truth telling, investigating and reporting, as perpetrators and victims came forward to share their stories, often depicting the most gruesome atrocities from the Apartheid.

The Truth and Reconciliation Commission (TRC) has delivered up much truth that had been hidden under layers of official perjury, denials and cover-ups. Many activists were abducted by the security forces, killed and buried secretly. As a result of the TRC we have been able to exhume some of those secret graves.

Tutu was one of the first international leaders to publicly call for an apology, when he urged John Howard to apologise to Aboriginal Australians for the discrimination they suffer, and condemned the “squalor” of living conditions in remote indigenous communities. He warned that it was not enough to simply “express regret” and that there was no point in “throwing money” at Aboriginal communities without a sincere apology. In his Sydney Peace Prize speech, Archbishop Tutu said: “Forgiveness and reconciliation are not easy. They are not cheap, soft options. Most of us find it difficult to say “I am sorry” even in the privacy of our bedrooms as spouses. Imagine how much more difficult it would be to do so in public. It is also not easy to forgive.”

I have heard that there have been difficulties in saying “We’re sorry”. There is no way you can move on without an acknowledgement of the past. “I am sorry” are the most difficult words in any language, but those three words have an incredible potency. They almost seem to have a kind of alchemy, a power that is almost magical. Those words are very crucial in human relationships.

Archbishop Tutu continues to be an influential leader in the global struggle for peace with justice, has published several books, and advocates for equality in issues such as HIV/AIDS prevention, climate change, ending poverty, homophobia, and the right to die with dignity. The Archbishop has also been recognised with the Albert Schweitzer Prize for Humanitarianism in 1986, the Pacem in Terris Award in 1987, Gandhi Peace Prize  in 2007, and Presidential Medal of Freedom in 2009.

Ubuntu is the essence of being human; it speaks of compassion and generosity, of gentleness and hospitality and sharing because it says: “my humanity is caught up in your humanity”. I am because you are. A person is a person through other persons.

An offence breaks a relationship, ruptures an interconnectedness, a harmony so essential for a full human existence. Ubuntu does not give up on the perpetrator but sees his capacity to change for the better and so ubuntu seeks to heal a breach, to restore relationships, to forgive and to reconcile