For his courageous and principled leadership for the independence of the East Timorese people, and statesmanship for the causes of human rights and peace with justice during the rebuilding of East Timor. 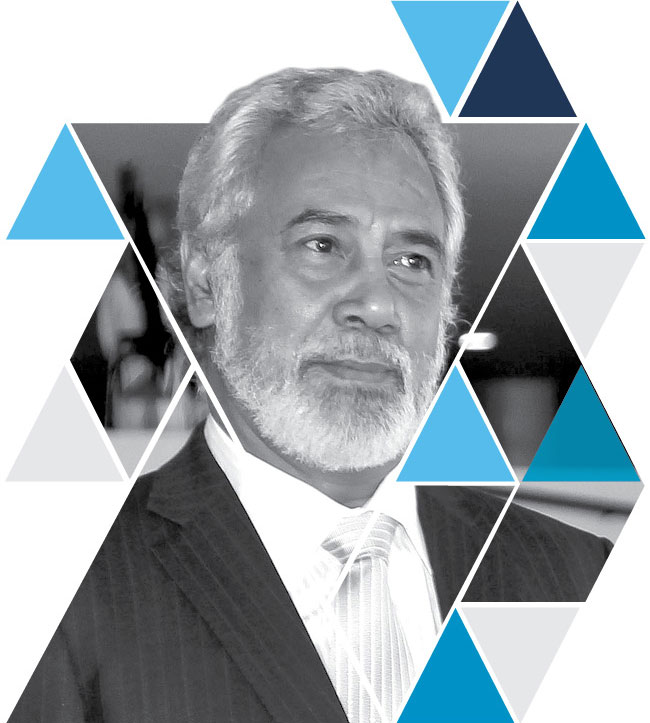 The 2000 Sydney Peace Prize was presented to Xanana Gusmão at the Great Hall, University of Sydney, by Rt Hon Sir Ninian Stephen.

One of his most vital contributions has been his leadership for forgiveness and reconciliation in Timor-Leste.

Son to two school teachers, Xanana Gusmão was born in 1946 in Manatutuo, in northern East Timor, what was then known as Portugese Timor. In his early twenties, Gusmão became actively involved in peaceful protests directed at the colonial system, and in 1974 he joined the political party Frente revolucionaria de Timor Lest (FRETILIN).

In 1974, a coup in Portugal resulted in the beginning of decolonisation of Portugese Timor, and plans were drawn up to hold general elections with a view to independence in 1978. On 28 November 1975, FRETILIN declared the independence of Portuguese Timor as “The Democratic Republic of East Timor”. As Portugal prepared to grant East Timor its independence, there was internal upheaval between FRETILIN and a rival political party, the Timorese Democratic Union (TDU). Indonesian forces took advantage of the disruption and launched a brutal invastion into the territory in December 1975, with the intention to absorb the colony.

Decades of civil war followed, devastating any hope at peace and democracy in East Timor.  Xanana Gusmão lead the East Timorese resistance movement, which continued to seek the independence of East Timor through both armed struggle and peaceful political activity. During his 17 years in the jungles of Timor-Leste, Gusmão became a vital leader in the organisation.

Gusmaão’s leadership meant he also became  a prime target of the Indonesian government. He was captured by the Indonesian Armed Forces in November 1992. After his arrest, he was held in secret military custody and his hearing was marked by violations of international and domestic standards for a fair trial. He was convicted and sentenced to life imprisonment in May 1993, which was commuted to 20 years by Indonesian President Suharto in August 1993.

Gusmão would spend seven years as a political prisoner, but although he was not released until late 1999, he continued to lead the resistance from within prison. Prison was tough and he repeatedly wrote about fear and mistreatment, noting that the authorities encouraged other prisoners to insult and harass him constantly:

In July 1997, President Mandela demanded that the Indonesian Government to release Gusmão’s release, stating that “You will understand that we cannot normalize the situation in East Timor unless all the political leaders, including Mr Gusmão, are free.”  By the time of his release, he had met with Jimmy Carter, Madeleine Albright and was regularly visited by United Nations representatives. International organisations like Amnesty International also called for his release, calling attention to the fate of dozens of other East Timorese political prisoners and prisoners of conscience.

On 30 August 1999, a referendum gave people a choice to become a special province of Indonesia, or to become independent. When an overwhelming majority voted for independence, the Indonesian Armed Forces unleashed a campaign of terror, resulting in enormous suffering. Although the Indonesian government denied ordering this offensive, they were widely condemned for failing to prevent it.

Overwhelming diplomatic pressure from the United Nations, spearheaded by Portugal, the United States and Australia, resulted in a UN-sanctioned, Australian-led international peace-keeping force (INTERFET). Gusmão was finally released, and upon his return to his native East Timor, he began a campaign of reconciliation and rebuilding:

My release is actually an unimportant matter. More important is how efforts to settle the East Timor problem in a manner that is just, peaceful and beneficial to all, can be continued. Just as we developed, over the past twenty-five years, the capacity to resist, we are now building our capacity to transform, to govern, to create and to live in peace.”

Gusmão was appointed to a senior role in the UN administration that governed East Timor until 20 May 2002. During this time he campaigned for unity and peace within East Timor, and was regarded as the de facto leader of the emerging nation. He became the first President of East Timor when it became formally independent on 20 May 2002. During his presidency, Gusmãu appealed for reconciliation and asked his fellow countrymen to both forgive each other and their perpetrators.

We must all be honest and acknowledge our mistakes and be humble to forgive others. We must start with dialogue because we know that reconciliation is a process to search for peace within each one of us before we speak to all the community and for us to respect each other.

We seek to build a society that is prosperous and participatory. The true wealth of our new nation will not be its oil or its gas, but its citizens. A country only develops successfully if its citizens are educated and of sound body.

Thus, education, health and agriculture represent the most basic services which we are committed to delivering to the entire population, with a democratic form of government sustained by the rule of law.

Learn more about Xanana Gusmão and his work