For bringing together Australia’s First Nations Peoples around a clear and comprehensive agenda; for facilitating healing and peace within our Nation; and for delivering self-determination for Aboriginal and Torres Strait Islander peoples, enabling Australia to move into the future with unity and confidence. 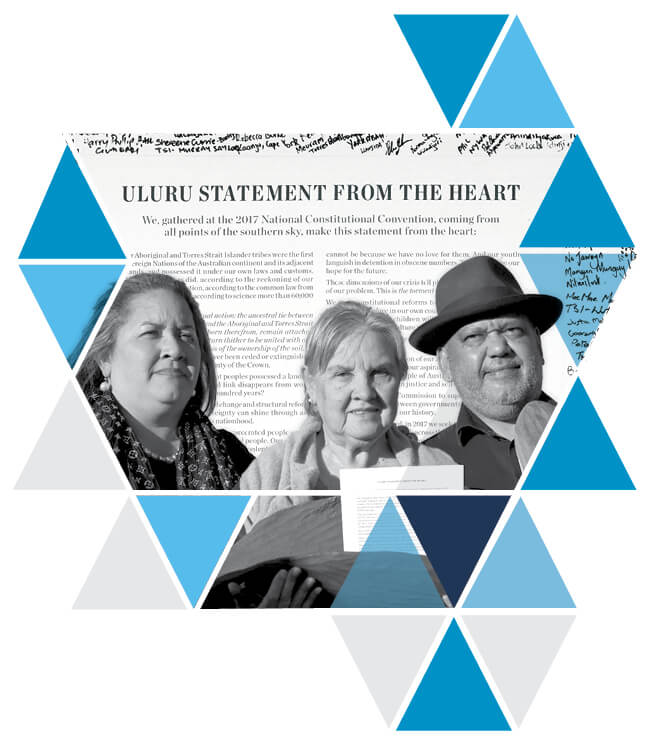 Accepting the 2021-22 award will be First Nations leaders and courageous architects of the Uluru Statement from the Heart Pat Anderson AO, Professor Megan Davis and Noel Pearson.  They will receive the Prize together at an official event on 10 November 2022. These leaders worked tirelessly to deliver the Statement in May 2017 and have spent the past four years leading the campaign for a referendum.

The Uluru Statement from the Heart is an invitation to the Australian people to walk with First Nations people to create a better future. It is a gift: a strategic roadmap to peace, where all Australians can come together to realise our nation’s true potential.

The Uluru Statement is the culmination of 13 Regional Dialogues – a historic deliberative consultation process with 1200 First Nations people – on the question of what constitutional recognition means for Aboriginal and Torres Strait Islander people.

At the Uluru Constitutional Convention in 2017, delegates endorsed the consensus of the Dialogues for a strategic and sequenced reform proposal: Voice, Treaty and Truth. As the Uluru Statement sets out, the first step is a Voice to Parliament, enshrined in the Australian Constitution.

A First Nations Voice, protected by the Constitution, will mean Aboriginal and Torres Strait Islander people have a say in the laws and policies that impact them. It also means that agreement-making and truth-telling can finally be done on equal terms. With Voice, we can begin the journey of coming together after a struggle – Makarrata. 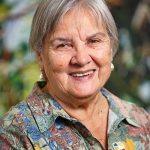 Pat Anderson AO is an Alyawarre woman known nationally and internationally as a powerful advocate for the health of Australia’s First Peoples. She has extensive experience in Aboriginal health, including community development, policy formation and research ethics. She has served as co-chair of the Referendum Council and served as the Chair of the National Aboriginal Community Controlled Health Organisation, Aboriginal Medical Services Alliance Northern Territory (AMSANT), and the CRC for Aboriginal Health from 2003 to 2009. Ms Anderson is the inaugural Patron of WoSSCA, the Women’s Safety Services of Central Australia. She was appointed Officer of the Order of Australia (AO) in 2014 for distinguished service to the Indigenous community as a social justice advocate. Ms Anderson has also received a number of medal for her contributions, including the Human Rights Medal in 2016. Ms Anderson currently serves as Co-Chair of the Uluru Dialogue and in 2022 she was appointed by the government to the Referendum Working Group and Referendum Engagement Group. She is also the current Chairperson of the Remote Area Health Corporation, and the Chairperson of the Lowitja Institute.

The Uluru Statement was issued as an invitation to the Australian people to walk with us First Nations people, and to compel the politicians we elect to embrace change and not be afraid of change. As Australians we walked together once before, in 1967, and it was the highest ‘yes’ vote in Australian constitutional history. We are going to have another run at it. 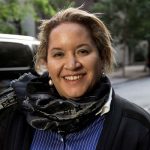 Professor Megan Davis is a Cobble Cobble woman, Pro Vice-Chancellor Society and Professor of Law at UNSW.  She is a renowned constitutional lawyer, and public law expert focusing on advocacy for First Nations people. Professor Davis is the Co-chair of the Uluru Dialogue and Acting Commissioner of the NSW Land and Environment Court. She is also the Balnaves Chair of Constitutional Law, a Professor of Law, and Director of the Indigenous Law Centre UNSW Law. She was a member of the Referendum Council, an expert member of the United Nations Permanent Forum on Indigenous Issues (2011-2016) and is currently a member of the United Nations Human Rights Council’s Expert Mechanism on the Rights of Indigenous peoples. In 2022 she was appointed by the government to the Referendum Working Group and Referendum Engagement Group. She is a Fellow of the Australian Academy of Law, and a Fellow of the Australian Academy of Social Sciences. She is also an Australian Rugby League Commissioner. Most recently she was nominated for the NSW Australian of the year for her ongoing work.

The Uluru Statement was the culmination of a dialogue process designed to take agreement and disagreement and elicit a pathway forward on the vital question of recognition. This is a tribute to the men and women of the dialogues who crafted a roadmap to peace for the nation. We are accepting this prize on behalf of all of the First Nations that participated in the Uluru Dialogues and the National Constitutional Convention at Uluru in 2017. 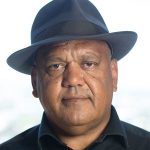 Noel Pearson comes from the Guugu Yimidhirr community of Hope Vale on south eastern Cape York Peninsula. Mr Pearson is a lawyer, Founder and Director of Strategy of the Cape York Partnership and Founder and Co-Chair of Good to Great Schools Australia.  He also co-founded the Cape York Land Council, and helped to establish Apunipima Health Council, Balkanu Cape York Development Corporation and Indigenous Enterprise Partnerships. Mr Pearson served as a member of the Expert Panel on Constitutional Recognition of Indigenous Australians and the Referendum Council. In 2022 he was appointed by the government to the Referendum Working Group and Referendum Engagement Group.

As long as First Nations peoples remain unrecognised, then Australia is missing its most vital heart. The Uluru Statement was the answer to the Commonwealth’s desire to recognise First Nations in the Constitution. The evidence four years later is overwhelmingly that Australians will support giving us a Voice. It’s time.

Learn more about The Statement
Donate to the Sydney Peace Prize

‘I have been most gratified to learn that the 2021 Sydney Peace Prize has been awarded to the Uluru Statement from the Heart, and I congratulate Pat Anderson, Megan Davis and Noel Pearson whose good work in delivering the Statement will be recognised by their receipt of the award.

More than four years have elapsed since 250 First Nations delegates attended the national constitutional convention at Uluru, and I remain immensely frustrated that the Statement from the Heart has not been comprehensively embraced by the Commonwealth Government.

I hope that this award will serve to revive and sustain public recognition and acceptance of the Statement and its modest and plaintive pleas that a First Nations Voice be enshrined in the Constitution, and that a Makarrata Commission supervise a process of agreement-making between governments and First Nations, and truth-telling about our history.’

‘The Uluru Statement from the Heart is a call for peace. It is a game changer. The statement is a rallying call to our citizens to ‘walk with us in a movement of the Australian people for a better future’. Uluru provides the leadership that we desperately crave to achieve respect, recognition, and reconciliation.’