Across countries and cultures over the centuries, the most powerful pleas for peace and the most significant protests against violence have come through poets. The Sydney Peace Foundation continues this tradition . 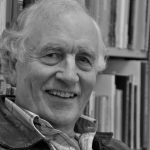 Emeritus Professor Stuart Rees, Founder of the Sydney Peace Foundation, has published three anthologies of poetry: The Jury’s Return (1992), Tell Me the Truth About War (2004) and A Will to Live (2014).

For years Stuart ran a post-graduate unit titled “Passion, Peace and Poetry” at the Centre for Peace and Conflict Studies, in which he integrated poetry with a study of the great non-violence leaders such as Gandhi and Martin Luther King.

A similar use of poetry to illustrate the theme of peace with justice runs through his book, Passion for Peace: Exercising Power Creatively (2003).

For an Anthology of Stuart Rees’ poetry, click here.

Here are Stuart’s latest poetic snapshots from his January 2012 trip to the occupied territories of the West Bank and Gaza:

From alcoves of rusty fuse boxes,

a spaghetti tangle of wires

beneath damp and peeling walls.

Women seeming dark in the darkness

where the width widens

theirs is a mansion

and this cruel tragedy

had never been composed.

of their right to return,

plea for help to escape

the shackles of permanence

with which their jailers,

in alliance with something called

have crafted the fantasy

should stay silent and invisible

because they do not exist.

would be difficult to watch

but can be found in this place.

Beyond signs saying ‘stop’, ‘no’ ‘forbidden’,

the concrete surrounds of walls and turrets,

topped by millions of miles of wire,

leave nothing to the imagination.

Once through the chambers of control

and for some, elimination,

an almost endless walk of shame.

Devoid of trees, grass or flowers

here is the stage set of a grand opera

distinguished by arias of cruelty

and acres of desolation.

into which human rights have disappeared

from a mind set which has created

at the silence of controls

where all have been conditioned

with the power of the poker faced

distinguish the worthy from the unworthy,

from the ones with Arab sounds

where most of the cast

can only guess at the script

let alone know when the curtain will fall

on the final act