For his courageous advocacy of the human rights of Indigenous people, for distinguished leadership of the reconciliation movement and for a lifetime of commitment to peace with justice, through dialogue and many other expressions on non violence. 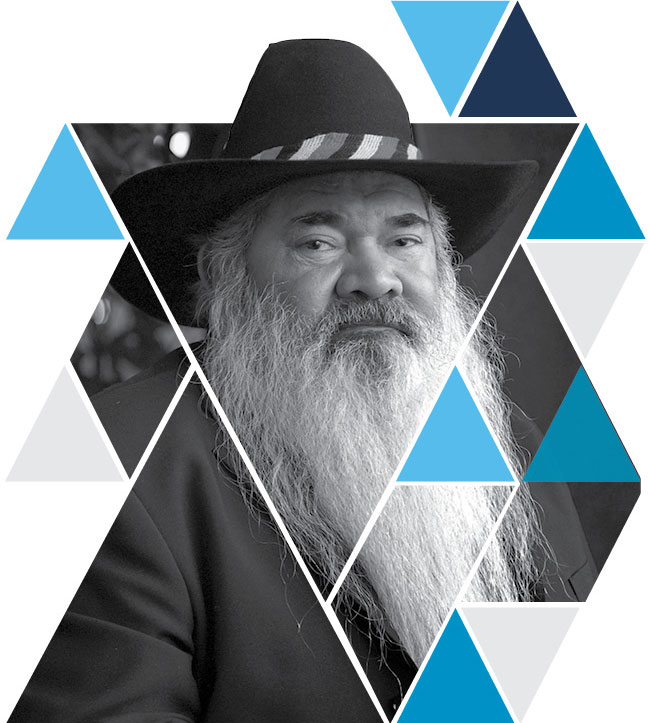 Patrick Dodson is a Yawuru man from Broome in Western Australia. He is one of Australia’s most respected Indigenous leaders, has been recognised as a Living National Treasure, and is often warmly regarded as Australia’s ‘father of reconciliation’. He has dedicated his life work to being an advocate for constructive relationships between Indigenous and non-Indigenous peoples based on mutual respect, understanding and dialogue. A major figure in Indigenous affairs, Patrick has consistently shown remarkable leadership, courage and vision from a young age.

The biography Paddy’s Road shares the story of Patrick Dodson’s life and extraordinary family history. From the moment of colonisation in the Kimberleys to the era of native title, from pearling to pastoralism, through missions and institutions, Dodson’s family has survived an uncaring and intrusive state system. Dodson’s grandparents were denied their inheritance, his mother forcibly relocated, his father imprisoned and his siblings detained. His family was forced to flee from the laws and systems set up to control their lives. Remarkably, along the road, Patrick and his family have maintained relationships with non-Aboriginal Australians of goodwill and compassion who have shared their journey, affirming what they had in common, rather than what set them apart.

The road to reconciliation

After completing his schooling, Patrick enrolled to study for the priesthood and became Australia’s first ordained Aboriginal Catholic priest. Unable to blend Catholicism and Aboriginal spiritual belief, Dodson left the priesthood after many years of confrontation. Following his departure from the church in 1981, Patrick turned his attention to Indigenous matters and reconciliation. Currently Senator of Western Australia, he became known for his work for Aboriginal Reconciliation in Australia and internationally. He has advocated for reforms within the justice system in Australia, was a Royal Commissioner into Aboriginal Deaths in Custody, inaugural Chair of the Council for Aboriginal Reconciliation, and Co-Chair of the Expert Panel for Constitutional Recognition of Indigenous Australians.

These Australians hear the whispering in their heart and know it can only be silenced by coming to terms with the original owners of this beautiful and bounteous land. Many Australians of goodwill sense that a moment for national leadership has slipped past us and is gone.

Leadership is an elusive concept, hard to describe and impossible to prescribe. It is more evident in its absence, so that when leadership is needed, its lack is sorely felt.

The Peace Prize Jury admired Patrick’s work for reconciliation nationally and internationally – in Northern Ireland and in South Africa. They were also impressed by his inspired and creative leadership of the Lingiari Foundation and as inaugural chair of the Council for Aboriginal Reconciliation. Commenting on news of this year’s choice of the Sydney Peace Prize, the Director of the Edmund Rice Centre, Phil Glendenning, said “This is a wonderful choice. Patrick is a great communicator, a significant leader, the nearest Australia has to a Nelson Mandela.”

Speaking from Broome, Mr. Dodson responded, “I would be very honoured to receive the Sydney Peace Prize. I thank the jury for considering me and my work worthy of such recognition.”

The struggle for Aboriginal justice in Australia has been concerned with the recognition of our claims to the sovereignty of the country, to its lands, resources and to enjoy a form of governance that allows for our values to impact the colonial institutional structures. Structures that administer policies and create laws for our welfare and determine arbitrarily what rights we might enjoy without us barely having a say.

There are times in the life of struggle for justice and peace when one wonders if your voice is ever heard or your message understood by anyone. It gives me great satisfaction to know, that tonight the many voices of the Aboriginal leaders who have gone before me, have in fact been heard. And that their days of mourning are beginning to be responded to by a nation and world that has for so long appeared disinterested and deaf to our cries for, in the words of Archie Roach, “A Justice Done”.

Freedom, Peace and Justice are values that are universally yearned for by all peoples. Their absence in the lives of individuals, communities and nations clearly diminishes us all if we stand by and do nothing.