For leading a global conversation about the crisis caused by economic inequality, for exposing the violence inflicted by market fundamentalism, and for championing just solutions to the defining challenge of our time: How can we break the cycle of power and greed to enable all peoples and the planet to flourish? 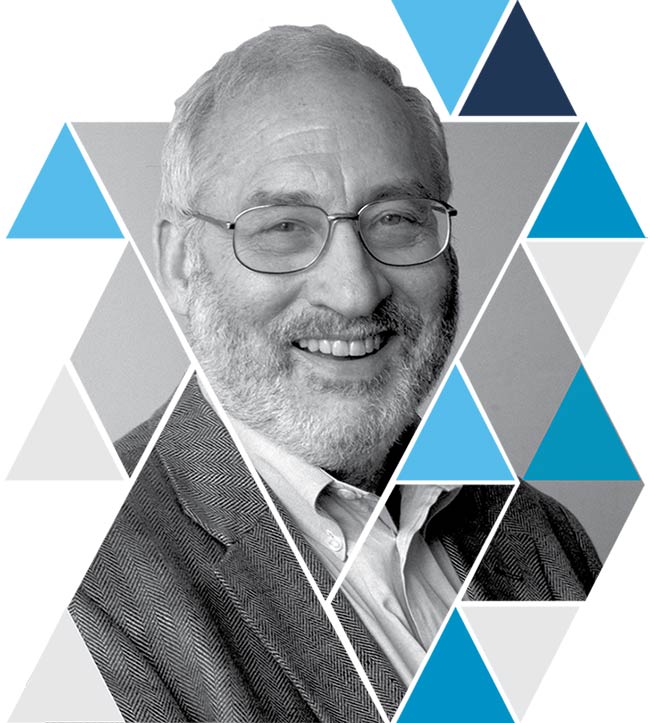 Today’s gilded age of the 1% is undermining the future of the 99% – a haunting reality and powerful concept pioneered by 2018 Sydney Peace Prize recipient Professor Joseph Stiglitz. Whilst political leaders have long preferred to speak about inequality “in quiet rooms in hushed tones”, Stiglitz has been sounding the alarm since the 1960s.

Inequality is one of the biggest challenges our world faces today. Around the world, the gap between the rich and poor is spiralling out of control. It is growing wider each year. Oxfam recently reported that 82 percent of all growth in global wealth in the last year went to the top 1 percent, whilst the bottom half of humanity saw no increase at all.

Our economic system is broken: and the concentration of wealth, resources and power in the hands of the 1% leaves many behind whilst big business and wealthy individuals benefit. This is an epidemic of exploitation, removing us further and further away from the just, equal and sustainable world we are working towards.

While this system is unfair, it is not accidental or inevitable. As 2018 Sydney Peace Prize recipient Professor Joseph Stiglitz says, inequality is created. It is the result of deliberate policy choices by people in power. This also means that a solution is not out of reach: our governments can act decisively to end the inequality crisis if they choose to do so.

Born in Gary, Indiana in 1943, Joseph Stiglitz grew in a politically active family. Witnessing inequality, poverty, discrimination and unemployment around him shaped Stiglitz’s understanding of the world. It motivated him to dedicate his life’s work to fighting for global social justice, changing the rules and politics that unfairly favour the wealthy.

Stiglitz established a reputation early in his career. He received his PhD from MIT in 1967, won ­Fulbright and Guggenheim fellowships in his 20s, became a full professor at Yale at 27 years, won the John Bates Clark Award for young influential economists in 1979, and taught economics at Stanford, Oxford and Princeton – all before he turned 40.

Amidst teaching complex economic theory, Professor Stiglitz offers his students a lesson to apply to both economics and life:

“Don’t settle for solving a small problem when you may be able to solve a larger one.”

It is advice he has lived by for years, as tackling and solving some of the world’s biggest problems has become his life-long mission. Dubbed ‘The People’s Professor’, Stiglitz is never one to shy away from weighing in on battles for global social justice. The theme that runs through his life’s work? Standing up for the ‘little guy’, defending the cause of the global citizen, and rewriting the unfair rules of globalisation. His priority? To win a more equitable share in the benefits of globalisation for the billion people who live on less than $1 a day.

As a prolific academic at world-leading universities and as an influential advocate in the policy world, Stiglitz has galvanised and shaped global debates on inequality and economic fairness over the last three decades. Whether as economic advisor to President Bill Clinton or the United Nations, or as Chief Economist at the World Bank, Professor Stiglitz speaks truth to power and challenges the all-powerful role of the markets.

In his 2001 Nobel Prize Lecture, he admitted:

As an individual I have not been content just to let others translate these ideas into practice. It was important to make people aware that in important cases, the institutions that were making the rules of the game and influencing the lives of millions around the world were getting their economics wrong [and that] there were reasons to question their technical legitimacy and their political legitimacy.

Warning that the global economic system is stacked against developing nations, Stiglitz has been credited for using his position to boldly challenge conventional economic approaches. In the hard-hitting world of policymaking, politics and strategic calculation, Stiglitz has never been afraid to rock the boat when necessary, reopening and pushing debates that far more powerful men had conveniently put to rest.

Taking his case to the public

Following his return to academia, Stiglitz continued to shape and rebalance global debates by taking his case directly to the public. Some of his most well-known books focus on topics such as the limits of globalization, fair trade, and devastating human and economic toll of the Iraq War.

He has authored international best-sellers that have been translated into 35 languages, such as Globalization and Its Discontents (2002), The Price of Inequality: How Today’s Divided Society Endangers Our Future (2012) and The Great Divide: Unequal Societies and What We Can Do About Them (2015).

In 2001, Stiglitz received a shared Nobel Prize in Economic Sciences for his pioneering work on Information Economics. Nobel Laureate and New York Times columnist Paul Krugman says Stiglitz is “an insanely great economist—almost every time you dig into some sub-field of economics … you find that much of the work rests on a seminal Stiglitz paper.”

Stiglitz has been a Professor at Columbia University in New York since 2001, where he also founded the University’s Committee on Global Thought and the Initiative for Policy Dialogue, a think tank on international development. He was also the president of the International Economic Association from 2011 to 2014, is the Chief Economist of the Roosevelt Institute, and has chaired The Brooks World Poverty Institute at the University of Manchester since 2005. In October 2008, Stiglitz chaired the UN Commission of Experts on Reforms of the International Monetary and Financial System which reviewed the global financial system and suggested steps to a more sustainable and just global economic order. Its final report, the Stiglitz Report, was released in 2009.

Throughout his career, Stiglitz has received more than 40 honorary degrees, including from Cambridge and Harvard, and he has been decorated by several governments including Bolivia, Korea, Colombia, Ecuador, and most recently France, where he was appointed a member of the Legion of Honor. He was in Time’s 2011 top 100 influential people, and is routinely called on by governments and international bodies to advise on sustainable and responsible economic policy.

Without justice, peace is hollow and fragile. When the world’s richest hold an unacceptable concentration of wealth and power whilst hundreds of millions fight to survive, we are all diminished and lose sight of our common humanity. Joseph Stiglitz’s work makes clear that society cannot function without shared prosperity, and shows us a path towards a better future where the economic system works for everyone, not just the 1%.

The 2018 Sydney Peace Prize Jury observed that a broken economic system is concentrating more wealth in the hands of the rich and powerful, fuelling an inequality crisis that leaves ordinary people struggling to scrape by, both in developing nations where people face extreme poverty, and in developed countries such as Australia:

We Australians cherish our belief in a fair go for everyone, but unless our government keeps powerful corporate interests in check and ensures our economy works to favour the 99%, people will hurt – and we know this can lead to division, fear and feelings of powerlessness.

“It is a tremendous honor to receive this recognition. It comes at a time not only when there is growing recognition of the magnitude of the crisis in capitalism and democracy caused by the Great Divide in our societies, but the political and economic consequences are being felt world-wide. We cannot have durable peace without social and economic justice, and our political and economic system today are failing to create a world with such justice. Another world is possible – one marked by greater equality, more democratic participation, and stronger and more sustainable growth. We know the economic and social policies with which we can attain this better world. The challenge today is our politics.”

“I am very pleased to learn that the Peace Prize will be awarded to the outstanding economist Joseph Stiglitz, whose insightful critical analysis of prevailing economic systems and doctrines has not only greatly contributed to our understanding of the contemporary world but has also provided powerful intellectual tools for creating a more just and peaceful global society.”

The 2018 Sydney Peace Prize was made possible by The Balnaves Foundation.

We were honoured that Oxfam Australia and The Australia Institute joined us to support Professor Joseph Stiglitz’s visit to Australia to accept the 2018 Sydney Peace Prize.

Oxfam Australia is committed to tackling poverty around the world. Highly unequal societies have poor social outcomes in terms of health, education and social cohesion. Extreme inequality entrenches poverty and weakens the fabric of our community by creating a social divide. This year, Oxfam found that globally 82% of all wealth created in 2017 went to the richest top 1% of the population, while the bottom 50% saw no increase in wealth at all. At the same time, it’s estimated that the largest global corporations are avoiding their fair share of taxes, ripping well over $100 billion annually out of developing countries around the world through multinational tax avoidance practices, and depriving governments of revenue to fund public services. This widening gulf between the rich and poor is making Oxfam’s job of tackling poverty harder. We’re working to ensure governments and businesses the world over pay attention to the impacts of this worsening inequality crisis and act to create more inclusive economic systems for everyone.

Australia Institute research shows that over the long run inequality in Australia is getting worse, and getting worse faster than in other developed countries. Over the past 20 years only the top 10% of taxpayers are seeing their share of income rise. It is time for governments to take rising inequality seriously and to implement policies,  whether through the tax and transfer system or giving more bargaining power to workers, to stop the decline before further economic and social damage is done to our economy and society.

Watch Around the World with Joseph Stiglitz